Patience—counseled by former Vice President Joe Biden all election week as Americans waited for votes to be counted—finally paid off Nov. 7, four days after Election Day, when he won in Pennsylvania and gained enough Electoral College votes to acquire a new title: president-elect. 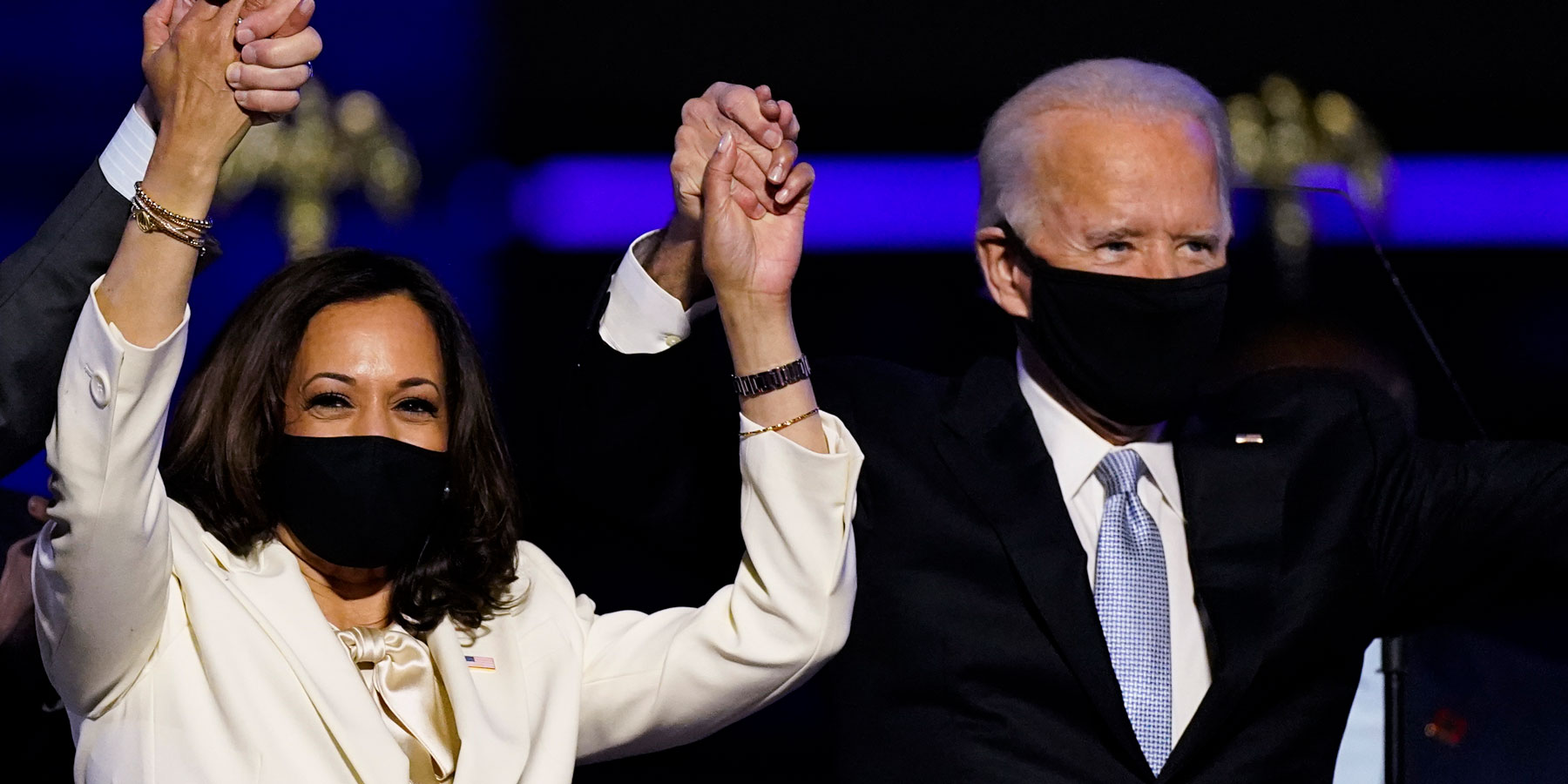 The win in Pennsylvania, and just a few hours later in Nevada, meant that Biden and running mate Kamala Harris had defeated President Donald Trump. In an election that posted the highest voter turnout in decades, Biden and Harris collected more votes than any presidential ticket in U.S. history.

This was the news that AFT members across the country had been waiting to hear as tens of millions of mail and absentee ballots were being counted. AFT President Randi Weingarten captured the relief they felt, saying: “Biden and Kamala have vowed to repair our country’s deep pain and division and will govern tirelessly for all of us. Today, America resumes the hard work of creating a more perfect union that helps everyone thrive, led by an effective, ethical and empathetic administration elected by more voters than any ticket in history.”Weingarten congratulated Biden and Harris, saying that AFT members look forward to their leadership and to working “with an administration that will embrace and fight for the values we hold dear.”

On Inauguration Day in January, Biden will become the nation’s 46th president, and Harris will be the first woman and the first Black person and Asian American to serve as vice president.

In a victory speech Nov. 7 in Wilmington, Del., Biden said he will set a new tone in Washington. “I pledge to be a president who seeks not to divide, but to unify,” he promised.

And in praising the next first lady, Jill Biden, the president-elect took special note of her connection and commitment to education. She is a community college teacher and “has dedicated her life to education,” he pointed out. “For America’s educators,” President-elect Biden said, “this is a great day. You’re going to have one of your own in the White House.”

Weingarten says she and other AFT leaders and members across the country “can’t wait to get started” on the work needed to overcome the multiple crises confronting America.

“Joe Biden is a person of great decency, strength, knowledge and compassion. He will deliver on his promise to make things better for those who struggle and strive, those who educate our children and care for our patients and our communities,” Weingarten says. “He and Kamala will confront America’s crises and fight for the promise of a better future.”

Biden said in his speech that on Nov. 9 he would name a task force of leading scientists and other experts to convert his plan for controlling the COVID-19 pandemic into a detailed action blueprint ready to be implemented when he takes office on Jan. 20.

“I will spare no effort—or commitment—to turn this pandemic around,” he said.

Boosted by record early voting during the continuing COVID-19 pandemic, massive turnout meant that the election drew one of the highest percentages of eligible voters recorded over at least the last century. About 100 million Americans voted before Election Day—by mail, absentee or in person. 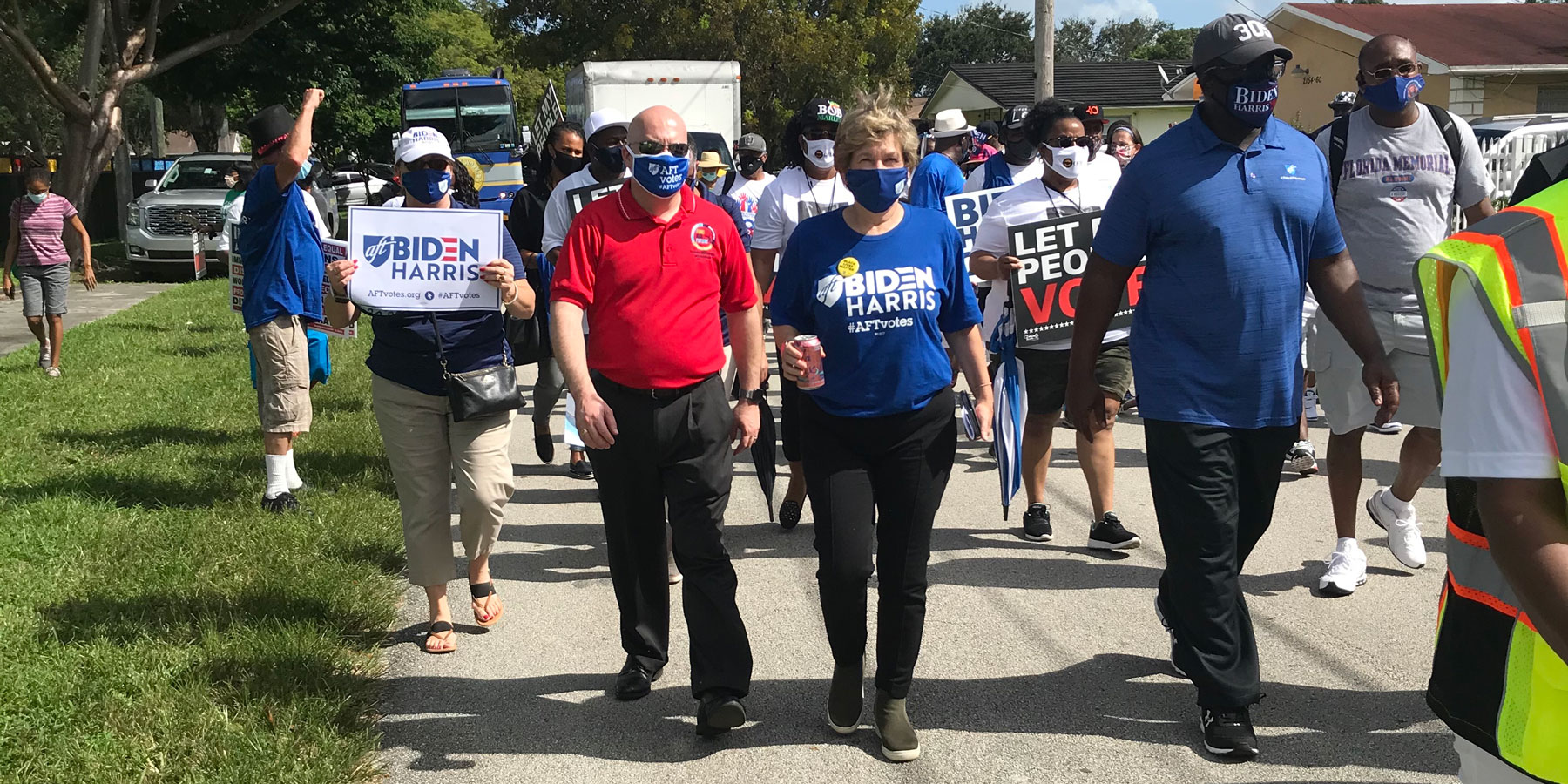 Just a week before the election, the AFT executive council adopted a resolution outlining the union’s commitment to American democracy and the requirement that every vote must be counted—even when the count takes more time than usual, as it did this year.

In the final days of the campaign, Biden and Harris said the election would give Americans the opportunity to make a new beginning for the nation.

During a telephone town hall on the eve of Election Day, Weingarten said she had seen “the resilience of people” during her travels across the country to mobilize voters to defeat Trump. “People are exhausted by the chaos and the division. They want change,” she said.

AFT members began their involvement with the presidential election nearly two years ago, when the union launched a candidate endorsement process that culminated in July 2020 with the AFT formally endorsing Biden at the union’s national convention.

Making good on that commitment, AFT members across the nation mobilized support for the Biden-Harris ticket throughout the fall campaign.

The centerpiece of that effort was the AFT Votes cross-country bus tour. With Weingarten leading the way—joined at various points by AFT Secretary-Treasurer Fedrick C. Ingram and Executive Vice President Evelyn DeJesus—the tour started in Los Angeles, crossed the mountains and the Great Plains, traveled across the Upper Midwest and down the Atlantic coast before finishing in Florida on Nov. 1, the Sunday before Election Day.

Along the way on the 33-day trip, the bus made stops in 14 states for get-out-the-vote rallies and other events aimed at local issues and candidates supported by AFT affiliates.